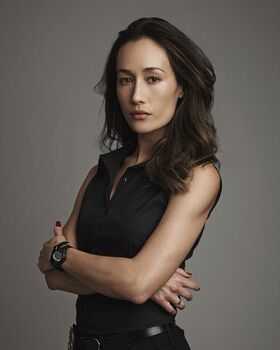 Lieutenant Beth Davis (born Michelle Webber) is a main character on the hit TV series, Stalker. She works for the LAPD's threat assessment unit, and comes into conflict with the new transfer to her unit Jack Larsen. She is portrayed by Maggie Q.

Beth is a Los Angeles detective and the head of the Threat Assessment Unit, whose job is to investigate stalking threats and act against stalkers. She was born Michelle Weber, and changed her name after her entire family was killed in a fire started by her former boyfriend, Ray. As such, Lieutenant Beth Davis did not exist until she joined the police academy 12 years ago and she has no birth records under that name, meaning that her current boss had to push her background check through the academy.

Beth Davis is a slender Vietnamese-American woman of average height. Apparently in her mid-30s, Davis wears her brown-black hair down straight or in loose waves. Her hair falls roughly to her shoulder blades. Davis tends to wear dark colors, slacks, and no jewelry other than her watch on her left wrist and one ring on her right hand. Her makeup is minimal and natural, and her nails are usually polished. Her clothing is mixed of black and dark blue top and pants, along with black leather boots and a police officer's belt.

What Ever Happened to Baby James

Beth wakes up and goes through her morning ritual. She later talks to her friend and encourages her to have fun and not to worry about someone from her friend's past.  She then leaves for work. She later tells Jack he shouldn't try to make impressions, especially not by barging in her office.At the McCoy house, she asks Hannah about the night before and her suspicions of having a stalker. She says she believes Hannah when the girl is doubtful, and asks her for a timeline.

Later Beth returns to the TAU offices, where she encounters Perry. When Perry says he won't rat her out, Beth says she doesn't even recall it happening. Later Beth walks in on Jack's role-playing, and they conclude Thomas is the victim. She goes back to the McCoy house where Thomas has now gone missing, and she tries to assure the family. She talks to Hannah about her boyfriend, and finds out she is dating a 28 year old guy.

Victor (the boyfriend) tells her there was someone outside. When Judith is identified as the kidnapper, Beth and Jack ask questions to Judith's ex-husband Derek. When he gives them an address, they rush to the house. There Beth poses as a neighbor who wants to borrow some sugar. When she's fairly close to Thomas and Judith, she tells Thomas to run while she gets hit by shelves. Beth recovers and heads after Judith and Thomas, who has now locked himself in the room. When Judith finds another way in, Beth and Jack barge into the room to find Judith holding a knife over the boy. Beth is able to take the knife away from Judith.

Jack Larsen - Beth did not like Jack to begin with, but she arranged for him to tail her to get used to how things work in T.A.U, and she realized quickly that he is adept at his job and began to grudgingly respect him for it. As her stalking by Ray and Perry becomes public knowledge in the department, Jack supports her with the rest of the group and helps keep her company, even showing up at her house with dinner and a movie just because "he needed company", showing that he enjoys spending time with her.

Janice Lawrence - Although Beth originally has only a very professional relationship with any of her detectives, it is Janice she goes to when she is in trouble - "I need your help." "You got it."

Prior to this Janice was the first to notice that Beth was acting out of character, and expressed concern for her wellbeing, telling her that even though they were not 'friends', she cared and wanted to help. Janice becomes a fiercely loyal and protective friend to Beth, investigating Perry on her behalf and even goading him into attacking her so that she can get a full search warrant on him. She also comes up with the idea of trading off keeping Beth company in her house so that she feels safer.

Ben Caldwell - Ben is junior in the department and is the last to find out about Beth's past and that she is now being stalked by Perry and Ray. Like the rest of the department, he rallies round to support her, and throughout the series she has been giving him more responsibility.

Amanda Taylor - Amanda is a work colleague of Beth, and becomes involved in Beth's own stalking case at Janice's insistence. It is unknown whether they have developed a personal friendship.

Perry Whitley - Perry was part of a stalking case investigated by Beth and the team. Following this case, Beth cornered him in a parking lot and beat him up, threatening him to stay away from his former roommate, who he had been stalking and who he "thought he owned". He becomes obsessed with her and begins stalking her, even showing up at her workplace and hiring somebody to do a thorough background check on her, allowing him to send her gifts reminiscent of her life as Michelle. Eventually, he helps get her former stalker Ray released from a psychiatric facility, with the intent of going after Beth together, although his endgame plan is unknown.

Ray - Ray frequently refers to needing to "get [her] back", which implies a previous romantic relationship between the two. However it appears that Beth broke it off for some reason, which led Ray to become obsessed and begin stalking her. He set the fire that (accidentally, he claims) killed her entire family, and was subsequently institutionalized. During the twelve years that he was in custody, Beth moved away, changed her name and rebuilt her life as an LAPD detective.

Over 6 million people are stalked each year in the United States. 1 in 6 women, 1 in 19 men. Stalking is the unwanted or obsessive attention from one person to another. Driven by rejection, jealousy, revenge. Stalking can be cause as the result of a relationship gone wrong or delusional fixation that are pushed to extremes.