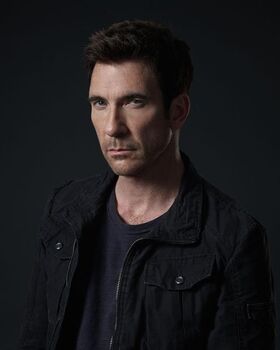 Jack Larsen is a main character in the series Stalker. He is portrayed by Dylan McDermott.

''What Ever Happened to Baby James''

Jack is first seen in his house, before he goes to his son's school. He sees Amanda dropping him off. He then heads to the office with non-fat not dairy chai lattes, much to Beth's displease. He gets shown around the TAU by Janice, and later accompanies her and Beth to a crime scene. He goes to investigate the garden where he finds a shoeprint. He also spots the treehouse, and finds signs of voyeurism in there.

Janice Lawrence - When Jack joined T.A.U, Janice was the only one of his new co-workers to be overtly friendly to him, showing him around and explaining how things work. She also helped him navigate the hostility he originally received from Ben, explaining that Ben resents Jack because he would like to be out in the field. She invites him out for drinks to get to know each other, which he politely declines, claiming that "It's never just drinks, Janice." and explaining that he's made similar mistakes with co-workers before and would rather not do it here.

However, he later takes her home after a stressful case and the two have sex. There is only a little weirdness afterwards, which they quickly sort out.

Amanda Taylor - At the beginning of the series, Jack and Amanda are estranged but have a prior relationship - it is unknown whether they were married or just dating, but they have a son together, Ethan. Due to something Jack did in New York, Amanda left town with her son to get away from Jack, and rebuilt her life in LA. When he transferred to the L.A.P.D. stalker division, she has a huge grudge against him and even threatens to reveal a big secret of his to his new boss Beth if he doesn't agree to resign and leave town. Additionally, despite effort on Jack's part, Amanda refuses to let him see Ethan, claiming it is too little too late.

Her attitude seems to change later on in the series after Ethan finds out that Jack is his father and expresses a desire to see him. He begins to have contact with Ethan at Amanda's house, and she appears to be attempting to patch things up with him for their son's sake.

Beth Davis - Beth is Jack's new boss in T.A.U. Originally she is resentful of him, as she had many candidates to choose from and he was not even on the list of those she would have considered. Jack's transfer was pushed on her from above, and she is hostile to him from the outset, brushing off his query about whether he's done something wrong by claiming she's just "sporadically rude".

She slowly warms to Jack after she realises he is very good at his job, and after he puts in effort to correct whatever he may have done to make such a bad impression on her - he's convinced it's because he looked at her breasts, and apologises for it frequently in "Pilot". When he confides in her about the secret Amanda is threatening to reveal, she tells him to fix it, as she'd hate to lose him.

When Beth's frightening past rears its head, Jack is very supportive and takes on a lot of her case himself, including searching for Perry and Ray, and tracking their credit card use. He also spends a lot of time at Beth's home to keep her company so she won't be afraid.

Ben Caldwell - Jack's relationship with Ben is originally rocky, as Ben resents Jack being allowed out in the field while he is kept behind a desk. According to Beth he "knows the pecking order, he just doesn't like it". Jack makes an effort to bond with Ben, taking him out into the field and telling him he likes him, although initially Ben is weirded out by this behaviour and calls him "one awkward dude."

Ethan Taylor - Ethan is Jack and Amanda's son. Until The Haunting, he had no idea that Jack was his father, and Jack had made covert attempts to make contact with Ethan under the name "Wesley", claiming that he lived locally and liked to run around the area. Ethan finds out by eavesdropping on his mom and her boyfriend that Jack is his father, and expresses a desire to see him. Amanda starts letting Jack come over to spend time with Ethan, and the two bond over video games.