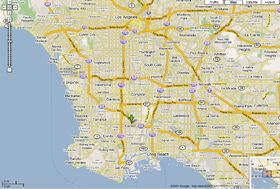 Los Angeles, officially the City of Los Angeles, often known by its initials L.A., is a major city in California'sSouthern California region, approximately 342 miles (551 km) south of San Francisco. With a population of 3,792,621 as of 2010,[15] Los Angeles is the second-largest city in the United States, after New York City, and the most populous city in California. Los Angeles is known for its mediterranean climate, ethnic diversity, celebrity culture, traffic, and the film and television industry. Los Angeles lies in a large coastal basin surrounded on three sides by mountains reaching up to and over 10,000 feet (3,000 m).

Los Angeles is the city where T.A.U works.