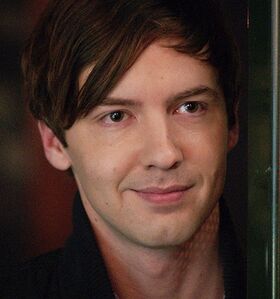 Perry Whitley (Erik Stocklin): Rich kid former roommate of Eric; amateur pornographer, but not a “vengeful little bitch”; creepiest of the stalkers by a country. He seems to have a gift for getting under people's skin with words and small actions, without doing anything that can really be proven. In the end, he realizes what he was doing was wrong, and tries to help Tracey from Ray, Beth's crazy stalker who murdered her family. He is killed in episode seventeen of Season One, Fun and Games by Ray hitting him in the head while he tried to protect Tracy Wright.

In hospital, he is questioned by Beth regarding his attack by Eric Bates, his former roommate. Beth questions him regarding a sex tape that was leaked online of Eric and a woman named Christie. Parry denies posting the video online and says "he showed his little sex tape to all his buddies and then they shared it with the internet". He tells Beth that he isn't going to press charges because he "wants to give him a second chance". However, he later goes to Eric's dorm room and makes an attempt to gain back their 'friendship'. When this fails, perry subtly threatens Eric. When Beth hears about this from Eric Bates, she takes things into her own hands. She tracks him down at night, pushing him to the ground and slapping him, intimidating him into staying away from his former roommate. Unfortunately, all this does is shift his platonic fixation into a romantic fixation on her. at the end of the episode, he is seen watching her through her bedroom window.

Perry had a relationship with Tracy Wright to get closer to Beth Davis.

-Beth Davis (an expert or near expert on the subject), theorizes that because Perry's mother died when he was four, "rejection and loss became his comfort zone", and he instinctively sees that as love.

-Perry's family is "important alumni" of his college, giving him a lot of lenience with his behavior on campus.

-Perry asks for mental help from Beth in episode two, stating that he knows there is something wrong with the "fixations" he forms, but it us never made clear if he is serious or just trying to get close to her.